The car offered here left the factory march 15, 1978, bound for the Los Angeles division of Maserati Automobiles INC the US importer. It was painted Oro Kelso (Kelso being the name of a famous race hourse) with Senape (mustard) interior, 5 speed. The distributor kept it for media use including an article in Sports car Graphic and a photoshoot with movie starlet Judy Landers. It was then dispatched to the San Fransisco dealer who fitted a Blaupunkt Berlin stalk radio with microphone and sol dit in January 1979 to its first owner. Michael Broughton froam Salem, Oregon. The car then changed hand a few times: January 1992, Ed Waterman of Motorcar Gallery Ford Lauderdale, Florida; July 1992, Toyota dealer and racer Javier Quiros from San Jose, Costa Rica; 1993 back to South Florida, summer 1999 at the Elkhart Lake Wisconsin Concours; Lance Everson Milwaukee. The latter advertised it in the spring of 2002 which is when it was inspected by Maserati Khamsin Registry founder Marc Sonnery who had actually seen the car 12 years earlier in Ford Lauderdale. He purchased the car in April of 2004. After a thorough service by local expert Steve Claasen he began enjoying it including top speed runs where he saw a indicated 160mph a few times. In December of 2004 he chaged the US spec bumpers tot Euro version and displayed it at the 2005 Cavallino Classic. Sonnery then moved back to Europe thought the car remained in Florida and he sol dit in 2007 to an enthusiastic couple from Laguna Beach California. It was then sold to its current owner, a Dutch BMW dealer who gave it a bare metal repaint in the original Oro Kelso, refurbished the rims, fitted new tires, a complete new exhaust system and partly restored interior.

Long a best kept secret for connoisseurs, the Khamsin is now recognized as one of the greatest Grand Tourers with excellent handling, incredible ease of use thanks to the hydraulics along with the addes cachet of rarity since only 430 were made. 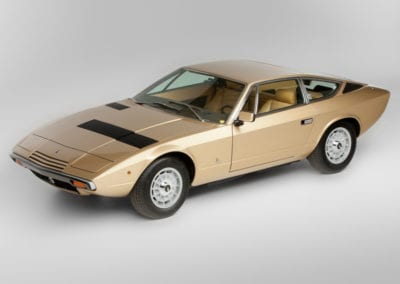 © Copyright 2015 Nout Classic Cars. This site is hosted by Digiad Webdesign and Hosting.

All photos, logos and text on this website are the property of Nout Classic Cars B.V. copying and / or distributing is punishable! Privacystatement click here